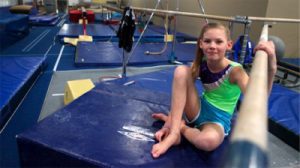 Julia Benway, 12, of Geneva is active at Excel Gymnas- tics. Benway was diagnosed with Cyclic Vomiting Syn- drome and has an episode of severe vomiting every 11 weeks.

GENEVA – On a bright fall morning in 2004, Shelley Kupetis was running errands with her 4-year-old daughter, Julia Benway.

“I have a headache,” the then-Geneva preschooler com- plained to her mother. “It’s too bright. The sun hurts my eyes.”

“I said, ‘We’ll go into this one store and go home. I’ll be quick,’ ” Kupetis recalled. “She tells me she wanted me to carry her into the store. I picked her up and we were just walking in and she threw up all over me. Clearly, she has the flu. And we went home. And it started from there.”

Nine and a half weeks later, Julia had the flu again. And again, another 10 weeks later. Then the cycle seemed to settle on happening every 11 weeks.

After that first episode, the cycles of vomiting always began in the early morning between 1 and 7 a.m. Julia would wake up with a headache, be dizzy, sensitive to light, and then start vomiting an average of 16 times during the day.

And after a few days of recovery, the little girl would be fine.

Kupetis said they knew it was not the flu, but what was it?

Julia Benway, 12, of Geneva is active at Excel Gymnas- tics. Benway was diagnosed with Cyclic Vomiting Syn- drome and has an episode of severe vomiting every 11 weeks.

A couple of pediatricians thought Julia had migraines, but Kupetis said she suspected it was something more.
“My fear was a brain tumor, but we had an MRI done and that was normal,” Kupetis said.

Lots of blood tests and an abdominal ultrasound was normal as well. After 18 months, a pediatric neurologist at Lurie Children’s Hospital of Chicago finally diagnosed Julia with cyclic vomiting syndrome.

It is an often-misdiagnosed malady in which sufferers – mostly children but adults also are affected – go through cycles of severe uncontrollable vomiting. But between episodes, they are perfectly normal. Research shows it is linked somehow to migraines.

Julia is a patient of Dr. B U.K. Li, a pediatric gastroenterol- ogist who heads the Cyclic Vomiting Syndrome Program at Children’s Hospital of Wisconsin in Milwaukee.

By talking openly about the disorder, Kupetis and Julia, now 12 and attending Geneva Middle School North, hope to raise awareness, interest in funding research for a cure or a more effective treatment.

Right now, the only true cure for children so afflicted is to grow out of it. Most do, but not all, Kupetis said.

Julia is active at school and goes to gymnastics twice a week, is on a swim team and plays violin. But everything is scheduled around her 11-week episodes.

Some things can’t be scheduled. She’s missed field trips, gotten sick on her birthday. She got sick at Disney World and while on a family vacation in the Caribbean – when her cycle of episodes briefly went off its clockwork sched- ule.

“It’s truly heartbreaking to see your child be this sick,” Kupetis said. “And harder since she’s gotten older. But she rolls with it.”

Julia has a picture of herself with “Grey’s Anatomy” actress Chandra Wilson at the Cyclic Vomiting Syndrome Asso- ciation’s 10th annual conference in Milwaukee last year. Wilson, the national spokeswoman for the association, has a teen daughter who was diagnosed with the same disorder. The show aired an episode where the disorder was identi- fied and the association was named.

Normally, Julia wrote, she throws up 12 to 17 times on the first day.

“Actually, throwing up is probably the best part of the ep- isode because I feel a little better and have less pain,” Julia wrote. “I am extremely dizzy, therefore I can barely move. I am very sensitive to light during the episode. I do not open my eyes until the middle of the second day.”

She usually misses four days of school to recover.

“The one thing that comforts me the most when I am re- covering is my dog, Roxie, laying by my side” when she gets home. Roxie is a chocolate mini-labradoodle.

She is grateful for the support she gets from friends, Emily Mutchler for one – the daughter of Geneva District 304 Superintendent Kent Mutchler – and from friends, twin sisters Fiona and Kylie McManus, whose lemonade stand this summer raised $100 for the Cyclic Vomiting Syndrome Association.
“I hope that everybody that has CVS – including me – will grow out of it. I hope one day there will be a cure for this rare disease.”

Half of those with this condition have bouts that are rigidly timed, and the other half has no warning before a cycle of vomiting begins, Julia’s doctor, Li said. Those with sporadic cycles are set off by stress or infection, not so with those who measure their bouts on the calendar, he said. “She is unique among those that are rigidly timed,” Li said of Julia. “Most of them are about two weeks or four weeks apart. But there is a small group that are nine weeks, 10 weeks, 11, 12 weeks. It is a very small group. It’s not in
the literature, but I call it ‘long cycle calendar-timed.’ That particular group that Julia falls into is the most difficult to control.”

When the cycle starts for Julia, she goes to Edward Hospital in Naperville where she gets anti-nausea medicines and intravenous fluids to counter the nausea and severe dehy- dration. She wears a mask because her eyes are sensitive to light.

“I don’t really get nervous or stressed before an episode,” Julia wrote in an email. “It’s a big part of my life to be sick every 11 weeks. I am only sad when I wake up in the morn- ing, the day of the episode and have to go to the hospital. I get fluids and I am usually there six to eight hours on that first day.”

Kathleen Adams, of Durango, Colo., founded the Cyclic Vomiting Syndrome Association 20 years ago. Adams said it took 11 years for her daughter to be diagnosed at age 13.

That is a puzzle to Adams, who notes the disorder’s strange on-again, off-again cycle is documented in France’s medical literature in 1862 and in England in 1880.

“We pulled it out of the cracks in the floorboards of medi- cine,” Adams said. “We started with a brochure, mailing it to pediatric neurologists and gastroenterologists. Now we have five international associations in five countries and 30 countries where either a family or doctors are contacts.”

Doctor specializes in treating CVS disorder
Dr. B U.K. Li at Wisconsin Children’s Hospital in Milwaukee said he has seen the greatest number of children suffer- ing from cyclic vomiting syndrome in the world, more than 1,000 patients.
Because of the large number of patients he sees in the Cy- clic Vomiting Syndrome Program he directs there, Li said he has been able to sub-classify various types.

Li credits Kathleen Adams of the Cyclic Vomiting Syndrome Association with bringing the issue forward, seeking doctors – including himself – willing to tackle the disorder.

“In the whole literature, probably there were 30-40 articles over a century,” Li said. “It was recognized – so to speak but there was almost nothing known and nobody cared about it … until several of us got involved in 1993.”

Li said working through the disorder’s complexities are like peeling the layers of an onion.
“We know stress is involved,” Li said. “We know it is very like a migraine – we really think it is a migraine variant – but nobody knows what a migraine is, so that certainly doesn’t help.”

Doctors also know that the autonomic nervous system that controls the heart rate and blood pressure is involved, Li said, as well as mitochondria – located inside the body’s cells and responsible to produce energy.

While studying the family histories of CVS patients, Li said doctors found that 80 percent of the mother’s side of the family had migraines, 20 percent of the father’s side had them. The concentration on the mother’s side is consistent with mitochondrial DNA mutations, Li said. Mitochondrial geneticist Dr. Richard Boles found two mutations that are highly predictive of having cyclic vomiting syndrome and migraine headaches, Li said.
The disorder can affect anyone at any age. Li said the youngest documented patient was six days old and the oldest documented was 73 when the vomiting disorder started.

Generally, three age groups are affected, Li said. One that starts as toddlers and around kindergarten, such as Julia Benway. Another group that starts in the teen years and may continue into adulthood. The third group at age 30-35.

“The first group tends to get better at the teen age years,” Li said. “There is a teen age onset group and we don’t know what happens to them, but clearly some of them go into adulthood. And we have adults documented at 30 and 35.”

Berkeley Prep senior helps others despite affliction
January 21, 2019
Woman can be sick up to 100 times a day due to condition many doctors don’t even know exists
January 21, 2019 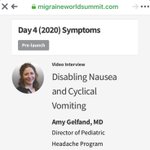 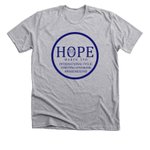 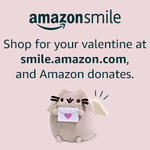